Mirin vs. sake: is mirin sake? Certainly not, here’s how they differ

Mirin and sake are both cooking wines frequently used in Japanese dishes. While they are substitutes for each other and both made from fermented rice, they are different ingredients.

This article describes both mirin and sake and the differences between them. 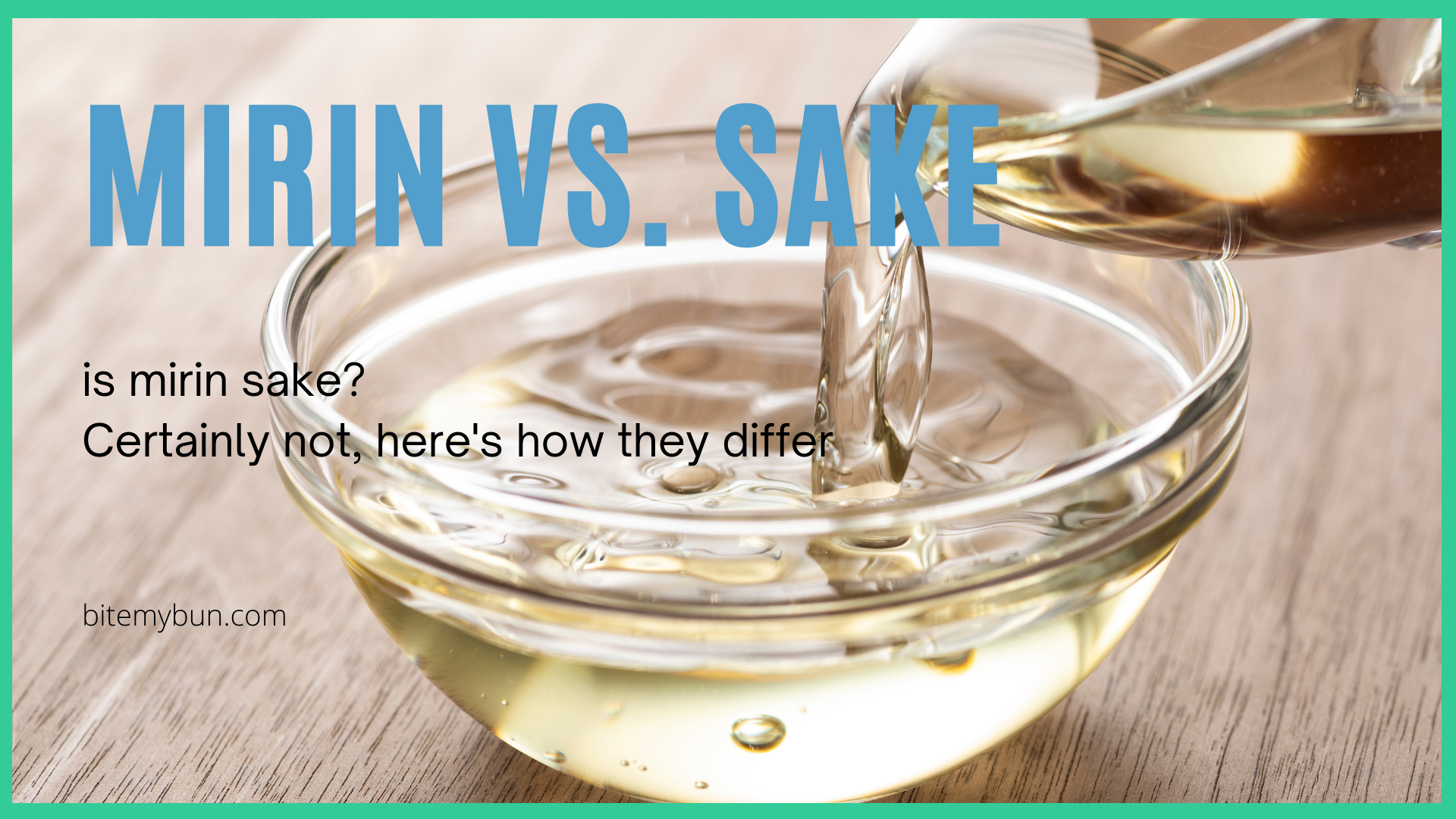 Sake is a standard rice wine that is brewed through a process similar to making beer.

The rice starch in the rice converts into sugar. The sugar then ferments into alcohol.

Sake is a common cooking ingredient used in Japan that is similar to how Americans use cooking wine.

How to use sake

To cook with sake, add it into your dish early to allow the alcohol to evaporate.

You can use sake to enhance the aroma and flavor of your dish, add sweetness to food, tenderize meat, and remove fishy or other peculiar odors.

Mirin is another cooking rice wine used in Japanese dishes. It is usually paired with salty ingredients such as soy sauce to form a sweet and tangy flavor.

Since mirin has a higher sugar content than sake, it adds more sweetness to marinades and sauces.

How to use mirin

You can use mirin in just about any dish to add a sweet, tangy flavor. Like sake, mirin also tenderizes meat and reduces fishy or other odors.

Mirin is often used as a glaze once the dish is cooked.

The differences between mirin and sake

When using sake as an ingredient in a dish, you will want to add it earlier in the cooking process. This allows the alcohol to evaporate. Since mirin contains less alcohol, you can add it to the dish later on or even after it is cooked.

The best way to use sake is to let it simmer with the food so it can absorb the different flavors. If you add sake too late, it results in a harsh taste. Mirin can be added at the end of the dish and will not result in a harsh flavor.

Can you use sake and mirin together?

Yes, sake and mirin are often used together in Japanese dishes. You will likely find both ingredients in dishes such as teriyaki chicken, sukiyaki, and chawanmushi.

What are substitutes for mirin and sake?

The best substitute for mirin is a mix of sake and sugar. Another option for those who can’t consume alcohol is Honteri.

Rice vinegar is not a good substitute for either sake or mirin.

Can I leave out sake or mirin in a recipe?

It is not recommended to leave out sake or mirin when a recipe calls for it. Both sake and mirin affect not just the flavor, but also the consistency and texture of a dish.

Cooking wines such as sake and mirin add luster to dishes. Skipping them can change the flavor of your dish drastically.

If you do not have sake or mirin and can’t get some, try a substitute such as dry sherry or other cooking wines mixed with sugar.

Is sake ok to drink?

Sake is ok to drink. It is a cooking wine that contains high levels of alcohol.

Sake is an excellent choice for health-conscious people looking for an alcoholic drink that is high in amino acids and made with simple ingredients.

Sake is a much healthier choice than other alcoholic beverages since it has been found to have many health benefits such as lowering cholesterol and improving heart health.

Is mirin ok to drink?

Pure mirin, or Hon mirin, is ok to drink.

Check the ingredients to see if there are additives or preservatives. If there are, you should not drink it.

Grocery stores often sell mirin-like condiments that are not ok to drink.

What are good brands of sake and mirin?

Certain brands of sake and mirin are better than others. If you find yourself in the Asian cuisine aisle looking for sake or mirin to cook with, look for brands such as Takara Sake, Gekkeikan Sake, Eden Foods Mirin, and Mitoku Mikawa Mirin.

If you do not see these brands, other brands will work just fine. If you are having trouble finding sake and mirin at the store, you can buy some online.

Amazon has many options to choose from.

What recipes can I make with sake and mirin?

If you got your hands on some authentic sake and mirin and are looking to try it out, here are some great recipes to try:

Can you get drunk from eating food cooked with sake or mirin?

Since sake and mirin are both cooking wines, they contain alcohol. Sake contains more alcohol than mirin.

However, if it is cooked in a dish, the alcohol evaporates and leaves just the flavor. You can’t get drunk from eating food cooked with sake or mirin.

You can get drunk from drinking sake or mirin. Pure mirin and drinkable sake both have alcohol contents high enough to get you drunk.

Make sure you add sake to your dish early on so that the alcohol evaporates. Mirin doesn’t have an alcohol content quite so high, so you can add mirin to your dish after it is done without worrying about harsh alcohol flavors.

Mirin and sake are both staple ingredients in Japanese culture. If you are looking to cook authentic Japanese dishes, you need to get your hands on sake or mirin, or both!

While they are very similar, mirin and sake differ in lots of ways. The main difference is that mirin is sweeter and has less alcohol than sake, which is safer to drink and can even be found in liquor stores.

Read next: Miso vs Natto | Differences in Nutrition & Popular Dishes with Both