by Joost Nusselder Updated:  January 11, 2023
I love creating free content full of tips for my readers, you. I don't accept paid sponsorships, my opinion is my own, but if you find my recommendations helpful and you end up buying something you like through one of my links, I could earn a commission at no extra cost to you. Learn more

If you like peppers, you HAVE to try Japanese shishito peppers. These small green peppers are quite mild compared to jalapeño or other hot peppers.

Roasting shishito peppers is very quick. All you do is drizzle olive oil and salt, then roast them in the oven on very high heat – preferably under the broiler until they blister, which takes only 10 minutes! But the secret is this creamy dipping sauce I’ll show you.

In this guide, I’ll share everything you need to know about Japanese shishito peppers and how to roast them so they’re blistered, soft, and ready to eat alongside your favorite Japanese dishes.

You can compare them to Padron peppers but there’s a catch: about one in every eight peppers is actually spicy!

When you eat blistered shishito peppers you have to take a small bite first to see if your pepper is the hot one of the bunch. Getting an occasionally spicy pepper is a fun surprise.

How to roast shishito peppers

There are two ways to roast the shishito peppers so they’re nice and blistered: in the oven on high heat or on the stovetop in a cast-iron skillet.

Roasted peppers taste their best when they’re cooked quickly over high heat. The best way to make them blister and lightly charred is to cook them fast on high heat.

You’re going for charred blisters on all sides and a fairly firm texture. Premature wilting and softening occurs when the peppers are cooked too slowly or at a lower temperature. 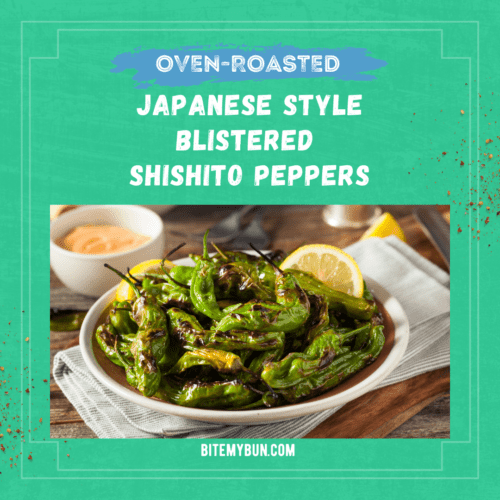 Joost Nusselder
Roasting shishito peppers in the oven doesn’t take more than about 10 minutes, depending on your method and the cooking temperature. You don’t even need many ingredients except for some olive oil or avocado oil and some sea salt for flavor. This helps the pepper skin blister.
No ratings yet
Print Recipe Pin Recipe
Cook Time 10 mins
Course Appetizer
Cuisine Japanese
Servings 6 people

You don’t want to overcook the peppers. Keep a close eye on them because they cook quickly!

If you don’t want them to “inflate,” you can poke holes in them with a toothpick.

It’s not a good idea to reheat them after roasting them because they become mushy when reheated. Prepare only what you intend to consume.

If you have trouble knowing when the shishito peppers are done roasting here’s a tip.

Pull the peppers out of the oven and check them. They should have a white-ish color with brown char marks.

Now, you need to know that after coming out of the oven, the roasted peppers deflate like tiny balloons and shrink in size. They become tender and slightly crispy which is just how they should be.

Roasting shishito peppers in a cast-iron skillet or pan

Roasting shishito peppers is very easy and only takes a few minutes. All you need is a pan, some oil, and peppers. I like to use avocado oil because it has a high smoke point and it’s a healthy oil.

Before starting, poke small holes in the peppers using a toothpick.

First, heat the pan on medium-high heat. Then, add the oil and let it heat up for a minute. Add the peppers to the pan and cook them for two to three minutes, until they’re blistered.

Don’t forget to toss the peppers occasionally so they cook evenly on all sides. Once they’re blistered, remove the peppers from the pan and serve immediately.

There are a few things to keep in mind when roasting your peppers. First, make sure the pan is hot before adding the oil. If the pan isn’t hot enough, the peppers will absorb too much oil and they’ll be greasy.

Second, don’t overcook the peppers. They should be blistered, but not burnt. Once they’re burnt, they’ll be bitter and no one wants to eat that.

Finally, if you want to add some flavor to your peppers, try adding a bit of garlic, ginger, or even soy sauce to the pan before cooking the peppers.

Also read: Why should you buy a cast iron pan? Tips and best buy

Olive oil and avocado oil are the best options when roasting shishito peppers in the oven or in a frying pan.

However, the savory and salty peppers also taste good when roasted with some peanut oil, sesame oil, or even grapeseed oil. It’s up to you since any vegetable oil will do the trick.

Usually, a high heat oil is the best but olive oil is an exception because it gives the peppers a really good flavor.

For the salt, you can use any coarse salt like sea salt, kosher salt, or Himalayan salt.

Roasted shishito peppers are a big deal in Japan – they’re on many appetizer menus. You can garnish and serve them in many ways.

Some people like to add sea salt and togarashi spice with a hint of lemon or lime juice.

The most simple topping is a good old drizzle of sesame oil.

You can also add a drizzle of soy sauce or tamari if you want more flavorful peppers.

Many Japanese restaurants served the roasted peppers with a drizzle of miso sauce and this adds lots of umami flavors.

You can also top the peppers with toasted sesame seeds and some smoked paprika for additional flavor.

How to serve roasted shishito peppers

Eat the peppers as soon as possible after they’ve been removed from the heat, preferably with crunchy salt.

They will wilt and lose their crispiness even if they are cooked quickly and at high temperatures.

That’s just how peppers react when roasted so to enjoy them nice and crispy, serve with dipping sauce hot out of the oven or pan.

Keep in mind that not all shishito peppers are created equal. Some peppers will be mild while others will be quite spicy. It’s the nature of the pepper so don’t be surprised if you bite into a hot one.

That’s just part of the fun! When serving, it’s best to warn your guests that the peppers may be spicy.

The best way to serve shishito peppers is as an appetizer or side dish. They go well with grilled meats or fish, and they’re also a great snack on their own.

The roasted peppers are usually dipped into a tasty dipping sauce.

Shishito peppers are a type of Capsicum annuum which isn’t spicy and is best served roasted.

Blistered shishito peppers are a staple Japanese appetizer that can be served as is or with a dipping sauce. You can find them at your local Japanese market or grocery store.

To roast, cook them on high heat in the oven for about 10 minutes and then serve hot with a mayo or yogurt-based dipping sauce as is or with your favorite grilled meats.