What does Sumimasen mean? Use it to thank or apologize

If you’re planning on going to Japan, but you don’t know the language, the word sumimasen can help a lot. That’s because it has a variety of meanings.

However, no matter what context it’s used in, the different meanings are all related. 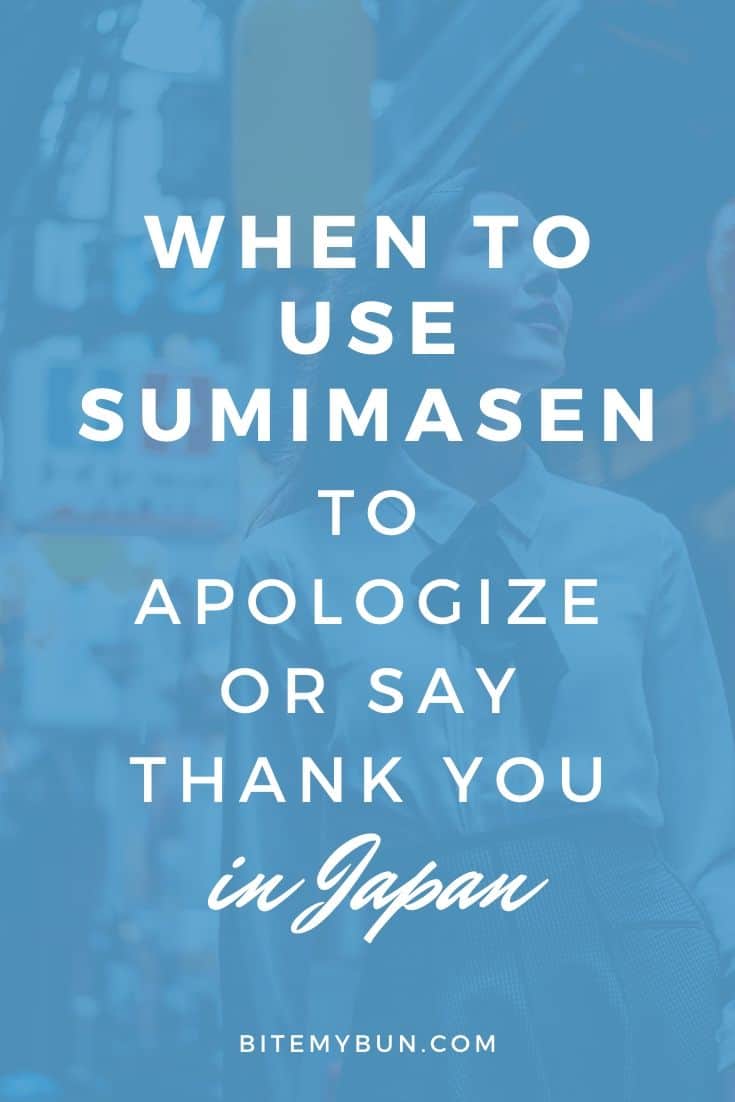 If this is getting confusing…..yeah, you’re not alone.

What does sumimasen mean?

Sumimasen means ‘thank you’ but it also means, ‘I’m sorry for the trouble you have gone through’. In this way, it means I’m sorry and thank you at the same time and acknowledges the effort someone has put into helping you out.

What is sumimasen literally?

When you go back to the origin of Sumimasen it stems from Sumanai, which means ‘unfinished’. That’s maybe why sumimasen literally means ‘isn’t enough’ or even ‘isn’t the end of it’, so however you say sorry or give thanks, it could never be enough.

And it probably isn’t (or should be) the last they’ll hear from you as you can now start to find ways to make it up to them :) 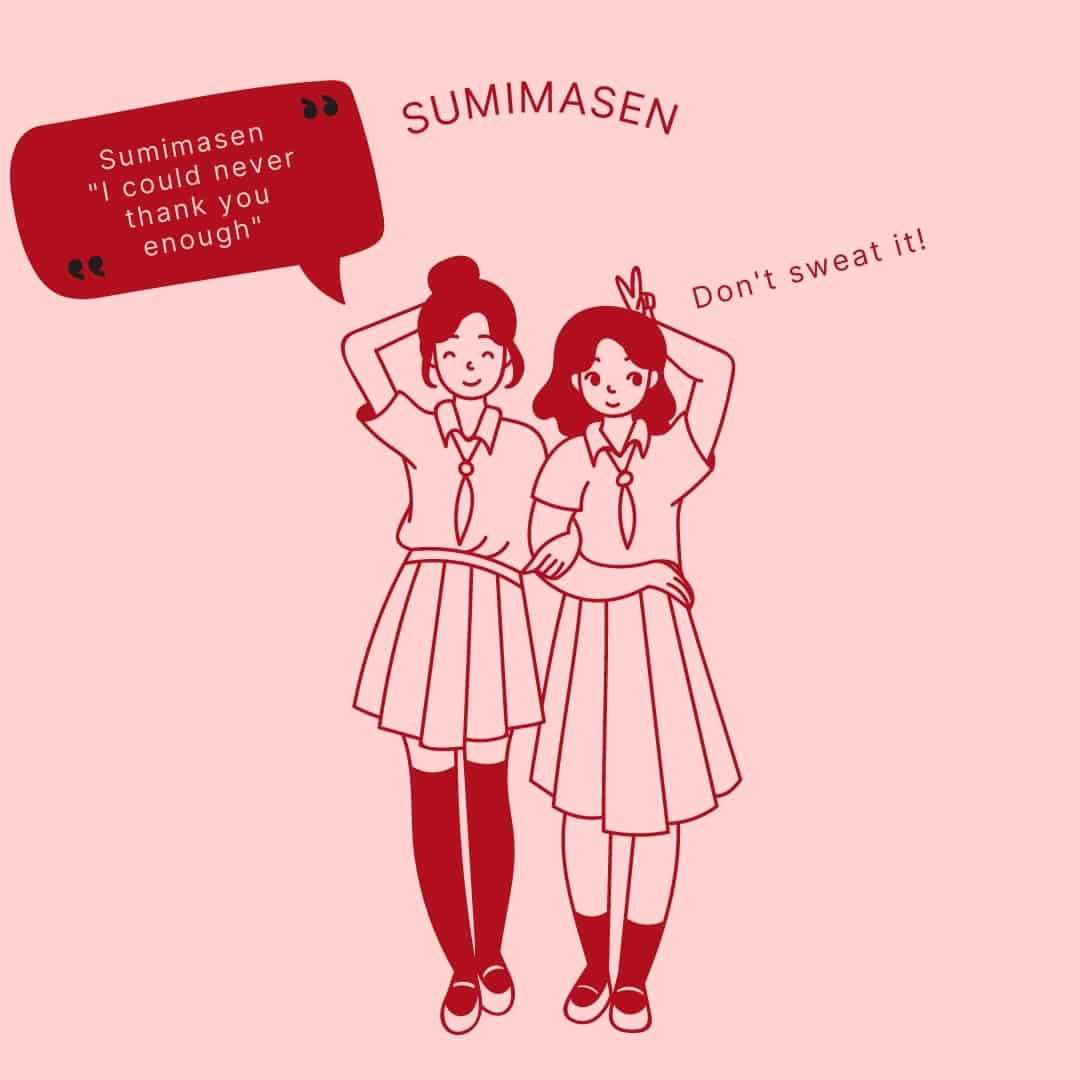 When Should You Use the Word Sumimasen?

In Japanese culture, Sumimasen can be used in any of the following situations.

There are other ways to say I’m sorry and thank you in Japanese. However, they don’t really have the exact same meaning so some could be used in one situation, but not another.

How to say thank you in Japanese

One way to say thank you is to use the word osoreirimasu. This is a very polite version of the phrase ‘thank you’ and it’s not something that you’d use every day.

It’s usually used when talking to customers or bosses. You wouldn’t use it when speaking to friends or family members.

And osoreirimasu is only used to say thank you, never I’m sorry or excuse me.

How to say I’m sorry in Japanese

Gomennasai is another possible substitute. It’s derived from the word gomen which means to beg forgiveness.

Is Gomennasai and sumimasen  the same?

Gomennasai differs from sumimasen because sumimasen does not ask people for forgiveness. It’s simply an acknowledgment that the person saying it has done something wrong. In use, Gomennasai is often more informal and used among family and friends where sumimasen is often used with one’s seniors.

Honto ni gomen ne can also be used. It means ‘I am really sorry’. Honto ni means really and adding it in makes it seem as if your apology is more heartfelt.

Sogguku gomen ne is an expression to be used between family members and close friends. It means ‘I am truly sorry’.

Moushi wakenai is another way to apologize. This expression means ‘I feel terrible’.

It’s usually used to apologize to someone you don’t know that well or someone who has a higher status than you do.

Moushi wake armasen deshita can be used in similar situations. It translates as ‘I am really sorry. I feel terrible.’

But you can also use sumimasen deshita in a similar way.

Sumimasen-deshita is when you more formally want to say that you’re sorry. It’s usually reserved for talking to your boss or elders but it can also be used to emphasize the gravity of the situation and use it when you made a huge mistake.

Literally, when you add deshita you create the paste tense of sumimasen and make it into an “I’m sorry for what I did,” maybe emphasizing that you’re truly reflecting on what happened.

A deeper way to apologize is to use the word ‘owabi’.

This is one of the most formal ways to apologize and it was famously spoken to the Japanese people by their Prime Minister Tomiichi Murayama.

He used the word to express his deep regret over the damage and suffering his people experienced due to ‘colonial rule and aggression’.

Arigatou is another way for the Japanese to say thank you.

However, sumimasen means thank you on a deeper level because it also acknowledges that the action they are thanking the person for may have caused an inconvenience.

There are many ways to say thank you using the word Arigatou. Here are some examples.

Sumimasen can be used to mean excuse me but shitsurei shimasu is a more polite way to say excuse me. It’s reserved for use at formal occasions and between strangers.

Some will be even more formal by saying osaki ni shitsurei shimasu which means, excuse me for leaving early or before you.

However, it’s since been shortened and most will use osakini or shitsurei shimasu but rarely will they use the two together.

When osaki ni is used on its own, its translation is more along the lines of ‘excuse me, I have to go’.

There is a bit of confusion about the origin of suimasen.

Some think it’s a slang version of sumimasen while others think it was adapted when people said the word suimasen quickly.

Both are kind of similar ideas.

Really, the long and short of it is, both words mean thank you but sumimasen is a slightly more polite way of saying it.

If you’re unsure of how suimasen will come across, it’s best to stick with saying sumimasen.

Why do Japanese always say sorry?

There are various ways to say ‘I’m sorry’ and ‘Excuse me’ in Japanese and it’s a big part of the country’s culture. But it’s more about being considerate and polite than apologizing and showing one’s readiness to learn from the mistake and do better.

This is quite unique and there aren’t many cultures in the world that share this type of thinking.

Japanese people are very aware of their surroundings and what others think of them.

They’re careful not to bother others with their actions and remarks and they’re very conscious of being decent people.

Because they’re so concerned about the impression they make, they’ll use words like sumimasen to smooth things over and avoid any possible confrontation or actions taken out of context.

In this way, the word can almost be used as a kind of self-defense.

Can saying sumimasen get you in trouble?

While sumimasen is usually meant to smooth things over, it can sometimes get people in trouble.

For instance, say you’re caught in a traffic accident. If you say you’re sorry, it can be seen as an admission of guilt.

However, people in Japan are so used to saying sumimasen, they may just say it anyway, even if they know the other person is at fault.

But you really should be careful in using it in these situations and reserve it for when you really are at fault.

How to pronounce sumimasen

If you put the word sumimasen into Google Translate to translate it to English, it will come back with the words ‘excuse me’.

This is the most literal English translation of the word.

If you’re wondering how the word is pronounced, it’s broken down like this:

The accent is put on the second syllable and the vowel sound is pronounced like a long e. There is no emphasis at all on the last syllable.

You can hear exactly how it’s pronounced by listening to this video:

How do you respond to sumimasen?

When someone says ‘I’m sorry’ in English, there is no one perfect response.

However, just leaving someone hanging after they apologize can be quite rude.

Japanese culture is similar. There is really no one set response that’s called for when someone apologizes. However, it’s always best to respond.

Here are some possibilities for suitable responses.

If you are responding to someone quite a bit older than you, or if you’re talking to a superior at work, you’ll want to take the more formal route.

This means you’ll want to say, I’m sorry as well. In these cases, you can respond with ‘sumimasen’, ‘gomen nasai’ or ‘shitsurei shimasu’.

You should also bow as you say these phrases.

If you are planning on leaving, you should be bowing while you walk away.

Why do the Japanese bow?

Let’s take a somewhat tangential route and explore why the Japanese bow so often, especially when apologizing.

Bowing is a sign of respect in many Asian cultures. Bows that are deeper and last longer will be even more meaningful.

When a bow accompanies an apology, it means the apology is deeper and longer-lasting.

Sumimasen is not rude in general but it can be rude if it’s used in the wrong situation.

Sumimasen is a lighter way of apologizing. It can be used when you accidentally strike someone or when you’re running a bit late.

However, if you try to use it when a more extreme apology is called for, it can be taken the wrong way.

If you’re looking to make a more extreme apology, try going with gomennaisai which means ‘please forgive me’.

This phrase is more universal and it can be used in both formal and casual situations.

These are best expressed when you bow your head as well.

Exploring the etymology of sumimasen

Sumimasen originates from the word Sumanai. Although the word means ‘unfinished’, its root, sumu means ‘with an unburdened heart’.

Therefore, it’s similar in meaning to ongaeshi ga sunde inai which means the act of repaying kindness is unfinished.

It can also be related to ‘jibun no kimochi ga osamaranai’ which means ‘I cannot accept this just like so’.

When you think of these more literal translations you can see how sumimasen can make an insufficient apology in some instances.

Why sumimasen might be the only word you need

If you travel to Japan, the language might be a major barrier. English and Japanese are quite different, and it can be difficult to master the words themselves much less the grammar.

Sumimasen comes in handy because it has a variety of meanings. More than that, it can help if you’re lost.

For instance, say you’re trying to find the Shinjuku Station. There are several things you can ask. For instance, you could say, ‘Sumimasen.

Shinjuku eki wa doko desu ka’. But to an English speaker, this phrase may be a bit complicated.

A simplified version is ‘Sumimasen. Shinjuku eki wa?’ Once you understand eki means ‘station’ it shouldn’t be too hard to translate.

Sure, the grammar isn’t great, but almost anyone you ask will understand you and you’re likely to find out where you need to go.

Sumimasen is a word that everyone who goes to Japan should know. It has multiple meanings, it’s a big part of Japanese culture and it can even help you get around town a bit easier.