Koji refers to a fungus that grows on rice or barley and starts the fermentation process. It is used on steamed rice or barley to make it into a fermented base for foods and drinks like Japanese soy sauce.

Do you know the difference between barley koji and rice koji? 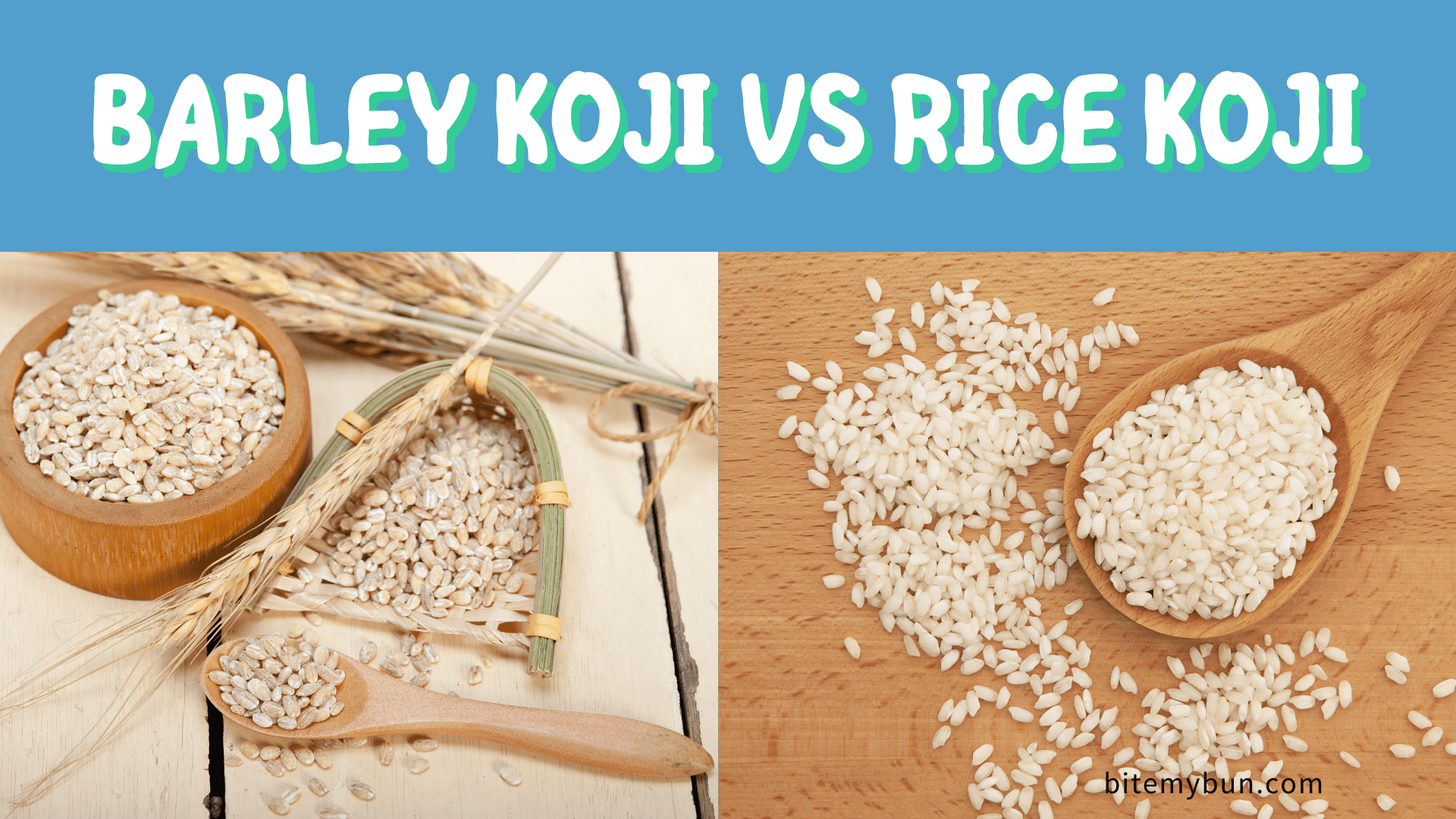 If you’re not familiar with either term, don’t worry – you’re not alone. In fact, even many experts in the food industry aren’t aware of the differences between these two types of koji.

This article will compare and contrast barley koji and rice koji, discussing the benefits of each and how they can be used in various applications.

By the time you finish reading, you’ll know everything there is to know about barley koji and rice koji – and you’ll be able to decide for yourself which one is best depending on what recipes you want to make.

There is a lot of buzz around koji these days. But what is it, and why should you care?

Koji (Aspergillus oryzae), or koji kin in Japanese, is a type of fungus/mold that is used in the production of soy sauce, miso, alcoholic drinks like sake, and other fermented foods.

There are two main types of koji: rice koji and barley koji.

There are some other types like soybean koji but that is used for other foods.

What is barley koji?

Barley koji (麦こうじ, mugi-koji) is a type of koji that is made from pearled barley. It’s known for its unique properties, including increased enzyme production and better flavor.

Soaked barley is steamed and then inoculated with the koji mold spores.

The benefits of barley koji include increased enzyme production and better flavor. It has a nutty flavor.

How do you use barley koji?

Barley koji can be used in a variety of ways, including:

What is rice koji?

Rice koji (米こうじ, kome-koji) is a type of koji that is made from cooked rice. It has a mild but sweet taste.

Rice koji can be made with white rice or brown rice. If you like brown rice for its health benefits, you can grow brown rice koji and substitute it for white rice koji since it’s very similar.

Making koji is quite simple. The white rice or brown rice steamed grains are inoculated with koji spores in a fermentation chamber. After a minimum of 48 hours, and once ready, the koji produces a sweet smell.

How do you use rice koji?

Rice Koji is the favored koji style of all time. It is widely used for fermentation. The koji spores grow on the rice and ferment.

You can get Dried Koji, Malted Rice from Organic White Rice or you can buy a brown rice koji starter pack like the RHAPSODY ORGANIC KOJI from Amazon.

Here’s a rundown of important things to keep in mind about rice and barley koji:

Both types of fermentation starters are made the same way:

Rice koji is a type of fermented rice that is commonly used in Japanese cuisine. It is made by soaking rice in water and then allowing Aspergillus oryzae – a type of fungus – to grow on it.

This process results in the production of koji rice, which is then used to make sake, miso, and other traditional Japanese dishes. The same process is used to make barley koji too.

Rice koji is more commonly used because it is easier to produce and has a milder, sweet flavor.

Barley koji is a type of koji that is made from barley. Barley koji has recently been gaining attention for its unique properties. It is higher in enzymes and has a stronger flavor than rice koji with an interesting nutty taste.

Rice koji, on the other hand, is used for most recipes, especially shoyu (soy sauce) and shio koji which is a popular fermented marinade for meat dishes.

It has a long history and is well-established in the culinary world.

Learn more about fermentation and popular fermented products all over the world!

Which one is better, barley koji or rice koji?

Well, that’s up to you to decide depending on the flavors you prefer. Since you don’t eat the rice or barley koji as is (it’s just a fermentation starter), each of these koji types will give your food or drink a slightly different flavor.

However, the taste isn’t overwhelmingly different since you can taste that fermented flavor.

You will taste the difference between the barley and rice koji if you’re making sake. However, for soy sauce or miso paste, the flavor difference isn’t as strong.

Can you use rice koji and barley koji interchangeably?

Most of the time, you can use rice koji and barley koji interchangeably in recipes.

However, for some applications like making miso, it is better to use rice koji because it has a milder flavor.

They both have their own unique benefits that can be useful in different applications.

For instance, rice koji is great for making sake, mirin, and other alcoholic beverages. It is also commonly used in food production, particularly in Asia.

Barley koji, on the other hand, is great for making miso and other fermented foods. It also has a higher enzyme content, which can make it useful for other applications as well.

The barley koji is better for longer ferments and saltier dishes like red miso paste. On the other hand, the rice koji is more neutral but tastes sweeter in shio koji.

The benefits of barley koji over rice koji

Barley koji has a higher starch content and a sweeter flavor. Barley koji is also more resistant to mold and can be used in wider applications.

However, rice koji is more commonly used because it is easier to find and less expensive.

There is no definitive answer, but barley koji does have some unique properties that make it a healthier option.

Rice koji is a good source of thiamin, niacin, and vitamin B6, while barley koji is high in fiber and has a higher antioxidant content.

Rice and barley koji are both types of fermented rice that are used to make traditional Japanese dishes like shoyu.

They are both made in the same way, but rice koji is more common because it is easier to produce and has a milder flavor.

Barley koji has a higher enzyme content and a stronger flavor than rice koji. The rice koji has a delicate sweeter flavor, whereas the barley koji is nutty and stronger.

Then you can use rice and barley koji to make miso soup, soy sauce, and sake. You can use handmade koji or store-bought dried koji starter for all your favorite Japanese food.