Tare sauce recipe: check out all the wonderful things you can do with it!

If you like to use dipping sauces, and you love Japanese cuisine, then tare sauce is the way to go!

Tare sauce is a Japanese dipping sauce, which means you can flavor any bite of food with it.

However, it can also be used for grilling foods, like yakitori and yakiniku, where it can make a good substitute for teriyaki sauce.

It can also be combined with broth and added to ramen and various soups, or it can be used to braise meat.

Every chef may make tare differently, but it typically has a soy sauce base with dashi or vinegar added for flavor. Soy sauce, mirin, and oyster sauce also fall under the tare sauce umbrella.

This article will review tare sauce offering recipes, uses, the best brands, and just about anything else you’d ever want to know about this wonderful condiment!

But first, check out this video by Ramen Culture on how they make tare sauce: 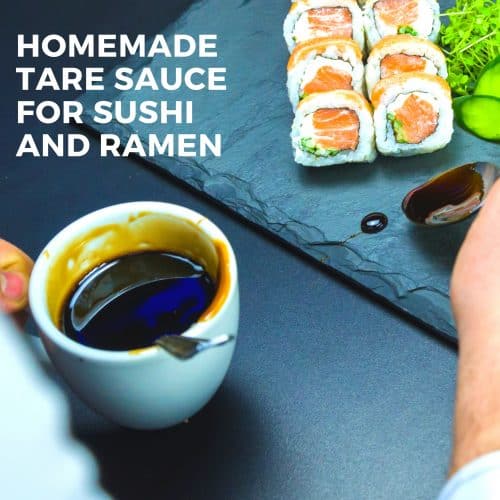 Although tare is diverse, most of its recipes are pretty similar.

As the above recipe is ideal for soup, you can play around with other recipes to make a thicker consistency for dipping or basting or to add a certain flavor.

But in general, a broth base is used, mirin, soy sauce, and sake are added, and a variety of spices are used to produce an umami taste.

In other instances, different spices can be added to give the sauce a kick. There are several brands that manufacture tare sauce.

Here are a few that are worth checking out:

Below, we’ll answer some questions you might have about tare sauce!

How long can you keep tare?

Tare will last for 2 months if it’s kept in an airtight container in the refrigerator.

Tare is the concentrated sauce used to season ramen.

Beef tare is basically any type of beef flavored with tare sauce.

Tare sauce is often used as the main flavoring for Japanese barbecue since the meat usually isn’t flavored before it’s grilled.

Because the ingredients in tare are so varied, it’s impossible to say whether it’s vegan or not.

While it’s usually vegetarian, ingredients like honey are often added to teriyaki sauces that fall under the tare umbrella. And honey isn’t a vegan ingredient.

Those on a gluten-free diet don’t eat foods that contain the compound gluten. It’s often found in products such as wheat, barley, and rye.

In general, tare won’t be gluten-free because it’s almost always made with soy sauce, which contains wheat.

However, there are gluten-free soy sauces that can be used. If tare is made with these sauces, it’ll most likely be gluten-free.

However, other ingredients in the sauce must be gluten-free as well.

Those on a keto diet eat healthy fats that are low in carbs and sugar.

Although tare sauce is generally low in carbs, it can contain sugary ingredients.

However, there are recipes for sugar-free teriyaki sauce and other sauces that fall under the tare sauce umbrella.

Because tare sauce can contain such a wide variety of ingredients, it’s difficult to find an appropriate answer for this question.

However, there are a few universal rules we can consider when determining whether or not tare sauce is healthy:

However, tare sauce is also usually fat-free and low in carbs and calories.

Furthermore, even though it’s high in sodium, it has been shown to have lower sodium levels than table salt.

For instance, some studies have shown certain tare sauces can improve digestion, reduce allergies and blood pressure, and boost the immune system. It’s even been known to have anticancer effects!

We know that tare can be used to flavor ramen, but did you know that the type of tare used in the ramen usually dictates the way ramen is classified?

For instance, you may see shio (salt), shoyu (soy) and miso ramen. These are all named according to the type of tare used in the ramen.

One exception is tonkotsu ramen. This type of ramen is named for the soup that’s used, not the tare.

There’s also a tonkotsu shoyu ramen, which is a reference to both the soup and the tare.

When used in ramen, tare works to add a salty flavor. But it can also bring an umami taste that has its own combination of sweetness, sourness, and spiciness.

For example, both shoyu and miso are saltym but they also each have their own distinct umami flavoring.

Keep this in mind when adding tare to ramen

When adding tare to ramen, it’s important to consider how much you should add. In general, it should be combined with the soup in a 1:10 ratio.

However, miso serves as an exception to this rule. It’s common to use more than 10% miso in soup because it isn’t as salty as other tare sauces.

Use tare sauce in your cooking

Tare sauce is the perfect way to flavor your meals. It lends a salty, umami taste that many diners find irresistible.