In teppanyaki cooking, sauces are most often served TOGETHER with the dish, not added while cooking.

Sometimes they might be used when preparing teppanyaki food on the grill but normally, as with most Japanese cooking, the ingredients will be cooked without a marinade, and you dip your juicy steak in the delicious sauces, just before you start to chew.

A good Teppanyaki sauce adds a salty, sweet, and often sharp edgy flavor to your food. They enhance the flavor and appearance and add moisture to the dish. Some ingredients used in teppanyaki sauces include:

I’ll show you how to make your own ginger sauce in a bit, as well as some other classics, but if you just want to try one out that’s ready-made and still has that authentic taste, you should go for this Kikkoman Teppanyaki ponzu sauce: 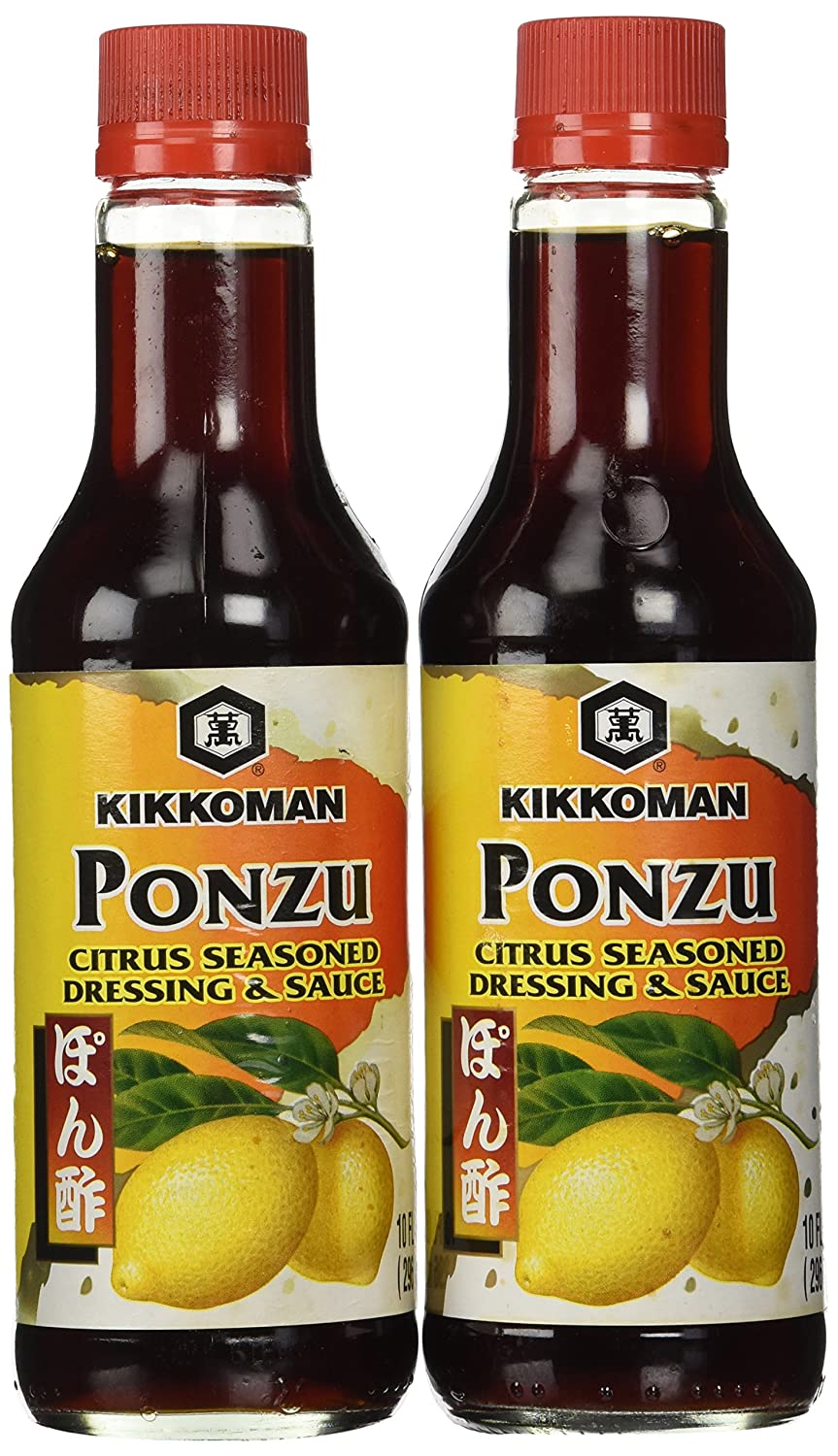 I’ll talk about these ingredients some more in the next sections below:

What are Common Japanese Sauce Ingredients? 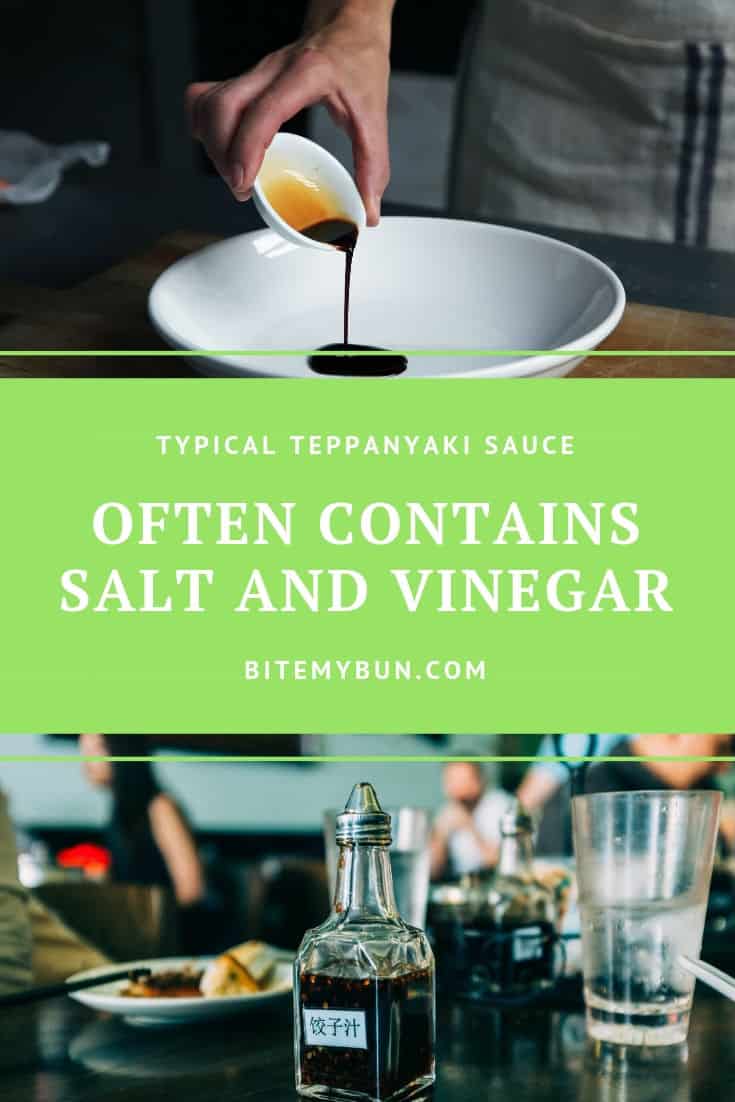 Soy sauce and vinegar are the most common ingredients use in Japanese sauces. Sake, ponzu, and mirin are also popular.

These ingredients can be used as standalone sauces or can be combined with other ingredients.

Usually, the ingrediënts are mixed together in a bowl. Take a look at my buying guide for a few handy tools to use for teppanyaki.

What is Teppanyaki Dipping Sauce made of?

These ingredients are usually in Teppanyaki sauces:

Now that you have an idea about the basic ingredients of Japanese sauces, you may want to try the following recipes.

These sauces are simple to make and they are a perfect pair for fish, meat, and seafood dishes. 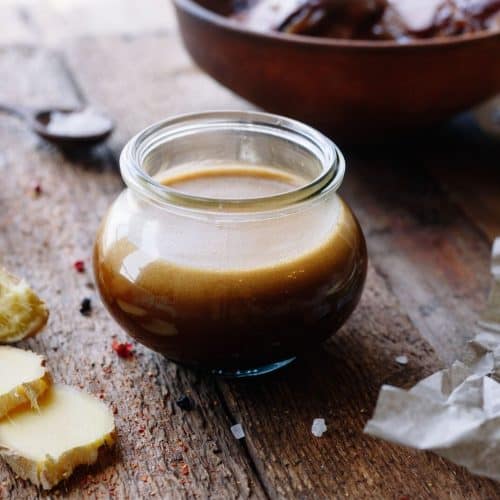 One of the easiest sauces to make is this classic soy sauce recipe, which perfectly blends with the taste of all types of teppanyaki dishes.

The ingredients are: 1 bottle of soy sauce, 1 sliced onion, and sliced garlic (you can add more or less depending on your taste).

This is a simple recipe that you can follow to make a flavorful teppanyaki sauce (or make one of these 3 mustard sauces).

This sauce is perfect for teppanyaki-style fish dishes. This is also a great addition to teppanyaki seafood.

To make this sauce, just:

There are other teppanyaki sauces that you can also try at home. As might be expected, pre-made sauces are also available in the supermarket.

However, homemade sauces are much more delectable and healthy.

This is a perfect pair for fish, chicken, steak, vegetables, and tofu. You can also replace the sugar and vinegar with mirin.

There is also another version of this classic sauce. You just have to add grated garlic and ginger and sake to the first version.

You can pair this sauce with grilled dishes or use this for marinating fish or steak.

This is a Japanese sweet barbecue sauce that can be a great pair for grilled dishes.

Since Japanese barbecue does not involve marinating prior to grilling, this sauce can play a major role in adding flavor to meats.

The ingredients needed to make this sauce include

This is also a rich and sweet sauce and is perfect for thinly sliced meats.

To prepare this, place all the ingredients in a pot and simmer for 1 ½ minutes. Then strain.

You have also the option to add grated apple and sesame seeds to the sauce. Then refrigerate overnight to properly mix the flavor together.

Heat the sauce before serving.

This sauce has a perfect combination of sweet and salty taste. This can also be used for marinating or glazing.

This sauce goes well with all types of meat dishes. If you are using it as a marinade, you can add sesame seeds and minced garlic as toppings.

If you are using it as a glaze, you may include cornstarch as an ingredient.

To prepare this, mix all the ingredients in a saucepan and boil. Allow it to cool until the sauce becomes a thick glaze.

This recipe is a combination of sake with:

The combination of ingredients creates a tangy and aromatic sauce or marinade. This goes well with meat and fish dishes. When used as a marinade, marinate the meat for several hours to cause the flavor to be absorbed by the meat.

Vinegar is also added to the ingredients to minimize the sharp taste of wasabi. To prepare this, mix all ingredients in a pan.

Add the marinade to the fish or meat. Then marinate the food for several hours.

How many Calories are in Teppanyaki Sauces?

Teppanyaki sauces are usually composed of spices and soy sauce. It enhances the flavor of meats and may have a high sodium content.

Being knowledgeable about the nutritional facts of Japanese sauces enables you to identify if these are good for your diet or health.

Japanese sauces are low-calorie options that add flavor to your meat or vegetables.

Teppanyaki sauces are a low-calorie option. One tablespoon of sauce approximately contains 16 calories, which is half the number of calories in conventional barbecue sauces.

So, if you aim to trim down your waistline, replacing barbecue sauces with Japanese sauces is a good idea.

Japanese sauce is a good option for diabetics. Since it only contains less than 5 grams of carbohydrates, you can definitely enjoy a flavorful dish without worrying about the number of calories.

In comparison, barbecue sauces contain around 7 grams of carbohydrates. One nutritional disadvantage of Japanese sauces is its high sodium content. One tablespoon of sauce approximately carries around 690 milligrams sodium.

Too much sodium intake can lead to fluid retention in the body, thereby increasing the risk of heart disease and high blood pressure.

Based on the recommended limit of the American Heart Association, the daily sodium intake should only be below 1500 milligrams.

However, 1 serving of Japanese sauce already contains half of the daily recommended limit.

If you want your Japanese sauces to have low-sodium content, there are low-sodium sauce recipes that you can try.

Are there vitamins and minerals in Japanese sauces?

Japanese sauce does not contain a high amount of vitamins and minerals. However, it contains some essential nutrients.

Iron is an essential nutrient to maintain blood health, phosphorus and magnesium can enhance bone health, and potassium can maintain fluid and electrolyte balance.

Japanese sauces also contain a minute amount of Vitamin B, which can boost your energy level.

Teppanyaki is a well-known style of cooking in Japan, which makes use of an iron griddle to prepare food such as yakisoba, shrimp, okonomiyaki, and steaks.

The term teppanyaki is derived from two Japanese words, “teppan” and “yaki,” which means “iron plate” and “grilled,” respectively.

Take a look at these teppanyaki essentials to start your grilling

This cooking style has been performed by the Japanese for several years and has been developed to a modern style—a chef cooking in a flat griddle in front of guests.

The combination of cooking and preparation skills and artistic presentation enticed a lot of diners in Japan.

Therefore, teppanyaki is not only considered a cooking style, but it is also a form of art.

Undoubtedly, teppanyaki is suitable for intimate or family dinners or for parties or crowds.

Going to a teppanyaki restaurant is very entertaining. It seems like you are watching a show while dining. You can witness a comedic chef preparing steaks in front of you.

These sauces can be bought in supermarkets, but there are also sauces that you can easily make at home.

Teppanyaki refers to meat and vegetable dishes that are grilled on a flat iron plate. Commonly, soybean oil is used in a lot of teppanyaki dishes.

Often, teppanyaki dishes are paired with garlicky spicy dipping sauce or simply salt. If you’re concerned about health than we also have this amazing keto sauce you can make.

Teppanyaki dishes can be prepared for family dinners; however, these are also perfect for larger crowds and parties.

Teppanyaki dipping sauces are also available in the supermarket. But these can also be conveniently made in your home.

Sauces that have sweet, salty, and garlicky flavor are a perfect pair for grilled beef steak dishes.

Soy sauce is the most basic ingredient of a teppanyaki dipping sauce.

However, as the teppanyaki cooking style has evolved, there are also other sauces that are great for grilled meats, seafood, and vegetables.

Sauces play an important role in enhancing the flavor of teppanyaki foods.

Want advice on how to get started? Check out our buying guide with all of the essentials