The vast ocean life under the sea is almost all safe for human consumption; however, not all are edible when raw.

While raw fish has only recently become fashionable in Western countries in the last half-century, sushi and sashimi dishes date back to the 15th century AD in Japan.

If you plan to make sushi at home, then be sure to follow these steps, so you can rest assured that the raw fish you’ll eat is safe. 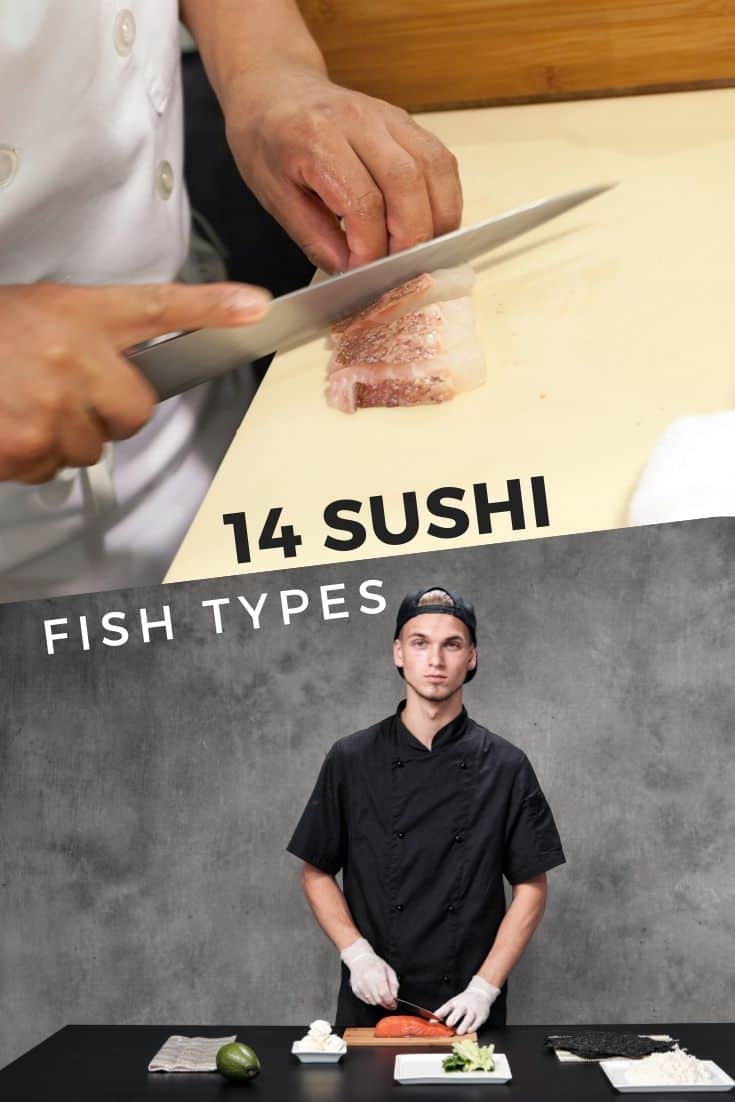 The raw sliver of freshly caught fish is hardly rivaled by any other foods, even though it’s not so well-adorned it goes well with either sushi rice or drenched in a spicy citrus bath.

And yet, despite how popular these simple dishes are (i.e. sushi, sashimi, Crudo, poke, and tartars) that you can find on restaurant menus, many people admit that preparing them at home is not an easy thing to do.

Part of the reason for this is due to the health-related risks involved in eating raw fish.

To help you make the best sushi and sashimi, we’ve compiled a list of the best fish types and seafood for it.

Because you cannot make a mistake when preparing dishes with raw fish meat in it, all your choices have to be impeccable and precise.

Continue reading below and find out which fish and seafood to pick to make delicious and safe sushi dishes.

Skipjack – this tuna is widely used in Japanese cuisine and it is known locally as katsuo. Sushi chefs use the Skipjack tuna to make sushi and sashimi, but it can also be served seared (a local dish called katsuo taki). It is also a key ingredient in making the dashi soup stock as well as shuto.

Yellowfin – this type of tuna is commonly found in the tropical and subtropical oceans of the world. In fish markets, it is labeled and sold to fish brokers as “sushi-grade,” “sashimi-grade,” and “others.”

Albacore – this type of tuna does not live in the tropical waters surrounding Japan, and until logistics in fisheries was upgraded it wasn’t found in most sushi recipes until recently. Sushi chefs were initially also reluctant to use it for sushi or sashimi as its pale and soft flesh were akin to older tuna fish despite the preparations fishermen made to keep it fresh and on ice.

Bigeye – excellent for sashimi, the Bigeye tuna has a moderately pronounced flavor, a good amount of fat (including Omega fatty acids) and taste better than Yellowfin. Bigeye tuna meat is large and flaky; the texture of the meat is firm as well. You can also use this tuna to make sushi.

Bonito – a close relative of the tuna fish, Bonito is smaller compared to its cousins and is only available during the spring and summer seasons. Few people can stand the strong smell of this fish, which is why it’s a rare treat even in sushi restaurants. Making a Bonito sushi can be challenging as you need to make sure it’s 99.99% fresh or else it will just spoil almost immediately once exposed to air.

Southern Bluefin – the Pacific Bluefin tuna is widely available in both the North and South Pacific Ocean and it can grow as much as 3 m (9.8 ft) in length and 450 kg (990 lb) in weight. Just like its cousin – the Atlantic Bluefin tuna – 80% of the catch is also consumed as raw fish dishes in Japan such as the sushi and sashimi delicacies. It is considered as good luck by the Japanese to eat foods that are made available during the first few days of the year, a good example of this is the Bluefin tuna.

It is sometimes called the Japanese Amberjack; Yellowtail (Hamachi) is the perfect fish to make sushi for people who have never tried sushi before.

Salmon meat is great to consume raw like that in sushi recipes. Its deep, rich color and flavor will make any sushi buff instantly fall in love with it. It’s also rich in healthy Omega-3 fatty acids, which is good for the heart.

Note: These seafood varieties are quite popular and commonly used for sushi; however, it’s also very easy for them to get contaminated with parasites. So make sure that they have been flash frozen before you buy and use them to make sushi meals at home.

This fish has a strong smell and flavor, so only use this fish in your sushi dish if you can handle it. The Mackerel fish is usually cured in salt and vinegar for several hours before it is used to make sushi.

The Halibut or Hirame in Japanese has a surprisingly rich flavor that people will love even if they’ve never tasted sushi before. It can be prepared in 2 ways and 1) it involves chilling it in the freezer for several hours or overnight before it is served, 2) is by using the kobijume method where the fish is first grilled searing the outside, then dunking it in ice.

Also good for novice sushi a-fish-ionados as its white meat is lean and it has a very mild flavor, which is great for sushi recipes. It’s also popular in sushi bars all year-round.

A fatty fish that’s rich in Vitamin B, the Unagi is usually grilled and brushed with soy sauce when served – it is never eaten raw.

Check this post I’ve written about unagi and its uses.

People often think that squid is not ideal for consumption, well, the sushi chefs in Japan would beg to differ and you’ll be in for a surprise of a lifetime if you’ve ever sampled squid sushi.

This is 1 of the tuna alternatives that always delight sushi lovers as it has a sweet and delicious flavor that goes well with the pickled ginger, wasabi and soy sauce.

Uni is a very delicious ingredient as you can see in my post about it here.

People are much less critical with an anonymous sushi chef at a random restaurant when they eat out than when someone prepares a ceviche at home.

The problem is that they do not know that the dangers of eating raw fish are pretty much the same in a sushi restaurant and at home.

People who have an affinity for cooking delicious recipes at home and love to cook tartare, for example, may think twice about doing the same for striped bass.

Not to mention the availability of raw fish is also a big logistical problem.

In the United States finding fresh seafood is hard to come by, and even those that live near the coastal areas, where good fish is readily available, find it difficult to tell whether the fish is fresh or not.

It should come as no surprise that people will have very low confidence in eating fish, let alone raw fish.

Finally, people get even more confused when they are unable to understand the terminology, which can sometimes mislead them as well.

You may find some sections in fish markets where tuna or salmon fish are labeled “sushi-” or “sashimi-grade” and the corner is cordoned off because they only accept special fish dealers/brokers.

If you’re lucky, you might find a great fish market that will suggest you try the sushi- or sashimi-grade hamachi and fluke for your next sushi dish.

But anyone who is familiar with sushi understands that you can have a wide selection of fish to make sushi or sashimi.

While fish dealers unintentionally label sushi-grade fish “safe to eat raw,” they also by no means erroneously suggest that other fish that do not bear this label are unsafe to eat raw.

In Japan, people normally believe that it takes great skill to make sushi, so they don’t make it at home like most food blogs would suggest you do.

The sushi bars in Japan are so plentiful that they’re almost ubiquitous there, and to be considered for the role of a sushi chef you must have a degree in Japanese culinary arts, which is why sushi chefs in Japan are highly respected.

As a matter of fact, even when the Japanese want to eat sushi at home they’ll never prepare it on their own, but instead, order it from a sushi restaurant.

From an economic standpoint it’s inefficient to buy several types of fish – and in large amounts – just to consume them all at once if you’re making sushi yourself.

Or you’d have to hold a pretty large party with a lot of guests.

But if the occasion is favorable, then it would be a lot of fun to prepare sushi by yourself, or with friends at home with one or two kinds of fresh fish.

Make sure that you ask the fish dealer whether the fish is freshly caught and flash frozen before you buy it and use it for your homemade sushi.

As the term implies “sushi-grade fish” it indicates that you cannot use just any raw fish to make sushi, so talk to your local fish dealer or fish market when you order fresh fish for your sushi.

Fish caught for normal use does not undergo a process called flash freezing as they do with tuna and other sushi-grade fish, therefore it may contain bacteria and is not good to use for raw seafood recipe.

Freshwater fish are not suitable for eating raw even if you flash freeze it.

You should also check out my post on this complete guide to sushi. It has everything you want to know about sushi for beginners to advanced.