How long does it take to digest ramen noodles?

You may have heard someone claim that it takes a long time for the body to digest ramen noodles, but is it true, and how long does it actually take?

There is a lot of misinformation out there, and we set out to set things straight. 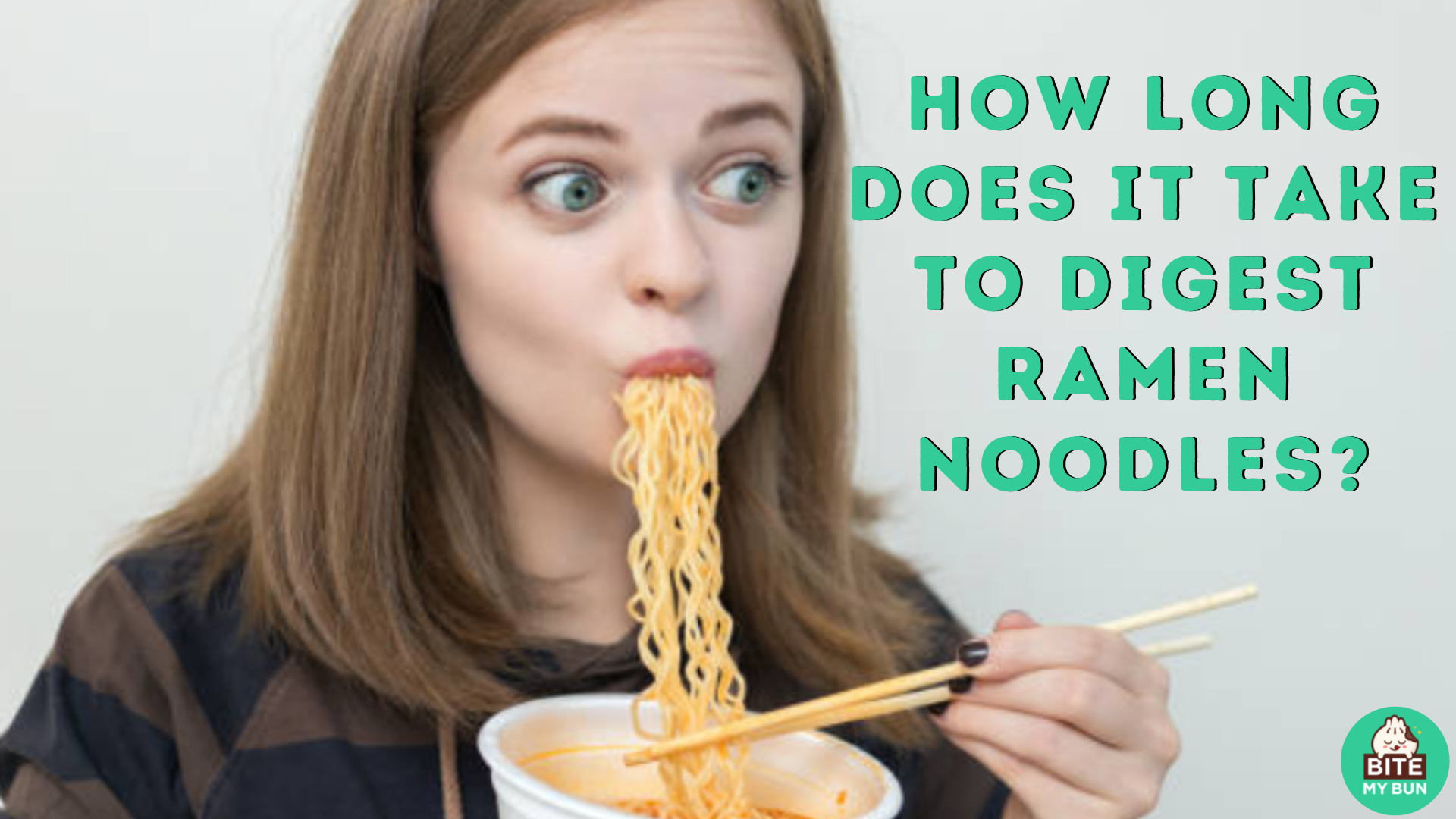 It is debatable how long it takes to digest ramen noodles, as it depends on your body and on whether the noodles are homemade or instant. Homemade noodles digest faster, and take approximately two hours for your body to digest, while instant ramen can take several hours longer.

As you can see, it isn’t true that it should take many weeks to digest even instant noodles, which some myths may have had you believe.

But it may take a couple of hours longer than what would be considered “normal” based on how fast your body can digest, for example, homemade ramen noodles.

Homemade ramen digest faster because they contain fewer preservatives, making them easier for the body to digest, while so-called instant ramen is full of preservatives, which leads to them lying around in your stomach for significantly longer.

The length of the digestive process will have an effect on the nutritional uptake and how healthy (or unhealthy) they are, but we will get into that in just a moment.

Instant noodles can contain TBHQ (tertiary-butylhydroquinone), propylene glycol, vegetable oil, BPA, and corn syrup – all ingredients that make it harder for the body to digest the noodles fast.

It isn’t the ramen noodles in themselves that take longer to digest, but the process used to make noodles. Homemade noodles digest much faster for this reason.

An interesting fact discovered when performing these studies was that while homemade ramen was already smaller and broken down after two hours – instant ramen almost appeared bigger and more voluminous, due to the body’s effort to break through the preservatives.

Also read: Can I Eat Ramen Noodles soup while pregnant?

Studies have been made to observe how the body breaks down ramen noodles, and most found that homemade ramen noodles and noodles with few preservatives digested reasonably fast.

This goes against the common misconception that all noodles digest slowly, as two hours is considered more or less normal.

Instant noodles with preservatives, however, digest much slower.

It was observed that the stomach had to work much harder using a process that appeared to move the noodles around in the stomach multiple times – something that is a lot more likely to cause stomach issues.

The reason why instant noodles force the body to work harder to digest is that it needs to break through the preservatives before it can start proper digestion.

Another thing that affects the digestive process is the type of noodles you are eating, and we aren’t just talking about homemade ramen and instant noodles.

Ramen and other Japanese noodles can be made of wheat flour, buckwheat, wheat, and Konjac Yam, and some of these take longer than others to break down.

Perhaps you are wondering if it is still okay to eat your favorite ramen noodles several days a week, and it can be! The Japanese certainly eat a lot of ramen.

Ramen noodles aren’t necessarily bad for you or harmful, but they also aren’t very nutritious.

If you are a big fan of ramen noodles, it is recommended that you mix in some protein and vegetables to make it a complete meal.

The main problem with instant noodles is that it takes longer for the body to process them, which leaves them lying around in the stomach for a longer period of time.

The struggle could lead to digestive issues like indigestion, constipation, and bloating.

Another problem is that when food stays in your stomach longer – it has a negative effect on the nutritional intake.

This means that even if homemade noodles and instant noodles contain more or less the same ingredients, your body will still benefit more from those with fewer preservatives and a shorter digestive time.

It is hard to set an exact time for how long it takes to digest ramen noodles, as it depends on a number of factors. If the ramen is homemade, then you can almost count on the time being around two hours, based on the lack of preservatives.

Instant noodles, however, are less predictable. It depends on what they are made of, how full of preservatives they are, and whether you have any sensitivities or allergies.

What you can count on is that it will take more than the two hours it takes to digest homemade noodles, but not days or weeks as you may have been previously led to believe.

Here’s another ramen hoax revealed: Are ramen noodles made of plastic and can they give you cancer?