Different regions have their own specialties. In the case of eggplants, Japanese eggplants have a unique appearance and taste.

They’re quite different from the ordinary eggplant in color, look, and flavor. And contrary to the standard teardrop-shaped eggplant, these are cylindrical.

There are many ways to get a great dish out of an eggplant. And the Japanese have developed multiple ways to cook it!

It can be fried, boiled, roasted, steamed, or grilled.

With such versatility, it all depends on the individual’s personal preference. Such flexibility is ideal for both vegetarians and vegans!

How to prepare Japanese eggplant

Eggplant can be enjoyed in multiple forms. Because you can use so many different cooking methods, each Japanese region and culture has its way of making it.

Since it’s easily available and has such great taste, eggplant is liked by almost everyone. It has a very low-fat content so it’s always a part of people’s dietary plans.

In this section, I’ll talk about the most popular and in-demand eggplant recipes.

Here’s Diana on how to salt the eggplant before using them, which can make them much less mushy and crisper: 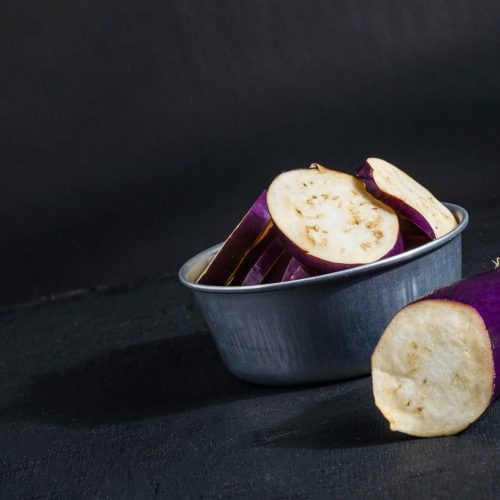 Joost Nusselder
It takes around 15 minutes to prepare this easy recipe. Having a delicious taste and extraordinary appearance, this recipe can be used when time is short or you want something light and mouth-watering. It serves 2 to 3 people and can be presented to guests to make a statement of original Japanese delight.
3 from 1 vote
Print Recipe Pin Recipe
Prep Time 5 mins
Cook Time 10 mins
Total Time 15 mins
Course Main Course
Cuisine Japanese
Servings 3 people

Flip the eggplants in between for thorough baking. This dish is best when served hot.
Keyword Vegetable
Tried this recipe?Let us know how it was!

I love this recipe because you don’t need a whole lot of ingredients. You want to make sure you’ve got some fresh eggplant ready.

I recommend getting American eggplant because this variety is usually bigger and has thick meaty flesh, making for a juicy and creamy miso eggplant.

If you can find small Japanese eggplants, get 3 so there’s enough to satisfy your hunger. The smaller the eggplant, the less bitter it tastes. However, choose medium-sized ones so they still have enough succulent flesh.

What’s the origin of miso eggplant?

The traditional Japanese eggplant recipe is called nasu dengaku, which translates to something along the lines of “fire-grilled eggplant”.

The word “dengaku” is used to describe foods that have a miso glaze. This dish was popularized in Japan during the spring planting season, and it’s usually served alongside white rice as a side dish.

Japanese eggplants (kome nasu) are generally much smaller than American, European, or Australian eggplants. However, you can use any type of eggplant you can find at your grocery store or farmer’s market.

In Japan, the most popular way to make nasu dengaku is to grill the eggplants.

Luckily, there’s an easy way to make this dish without going outside and grilling. I know that not everyone feels like firing up the grill for a few eggplants.

That’s why today, I’m sharing a healthy low-fat version you can make by pan-frying and broiling. This recipe is a healthy vegan dish you can cook up in less than 20 minutes.

All you need to do is pan-fry the eggplant for a few minutes on each side, season with miso glaze, and then broil in the oven for a few more minutes!

If you want the eggplant to be extra soft and tender, soak it in water for a few minutes.

This process also removes the tangy or astringent and often bitter taste. You can even remove some of the big seeds because they taste bitter.

Also, did you know that there are male and female eggplants? The males are better for the recipe because they contain fewer seeds and have a sweeter taste.

To check for a male eggplant, look for slimmer, longer plants with a round indentation mark on the bottom.

The traditional Japanese eggplant recipe calls for red miso or awase, a mix of white and red miso. It has a strong savory flavor.

If you prefer a more subtle taste, use white miso, which also has a lower sodium content.

Each serving of miso eggplant has about 290 calories, 16 grams of fat, 27 grams of carbohydrates, and 94 mg of sodium.

Awase miso has high salt content, so substitute it with white miso if you can’t have too much salt.

Eggplant is a good source of vitamin A, vitamin C, calcium, and magnesium.

And by the way, this recipe is gluten-free and vegan!

What to serve with miso eggplant?

As I mentioned before, it’s perfectly fine to have this dish as a main course, but some delicious pairings complement the savory miso flavors.

If you want an easy side dish, you can pair this Japanese eggplant recipe with plain boiled white rice or jasmine rice.

Alternatively, you can serve the eggplant with curry or various chicken dishes, like baked crispy chicken or grilled chicken. You can also try it with some fried tofu or konnyaku (konjac plant) if you prefer vegan food.

Don’t forget to drink a cup of genmai tea to soothe and aid digestion.

There are more additional toppings you can add besides sesame seeds and scallions. To add a pop of color and flavor, add grated ginger, micro herbs, and even spicy sauces.

It’s up to you to add flavors you like, but the traditional recipe calls for simple sesame and spring onion/scallion topping.

Now it’s time to fire up the pan and get that miso paste bubbling!

If you like vegetable dishes, check out my teppanyaki recipe for stir-fried vegetables, which could be a great side for larger eggplants.

Roasted eggplant serves both as a full course meal and a side dish.

For a healthy and beneficial lifestyle, this Japanese eggplant recipe can be enjoyed with miso rice. However, as a side dish, you can eat it with chicken or salmon with different kinds of sauces such as soy, etc.

You have to roast the eggplants until the center melts. Then, you can garnish them with sesame seeds to give them a complete look. This Japanese eggplant recipe serves 4 to 6 individuals.

Note: Don’t go overboard when brushing the oil on your eggplants. And make sure to flip the eggplants in between baking to cook them completely!

Japanese eggplants can be easily grilled. Since they’re much softer and smoother than regular eggplants, their cooked filling gives a mushy effect.

Grilled eggplants can be enjoyed with tahini sauce to get a creamy texture. Or they can be eaten with soy sauce to get a traditional Japanese flavor.

A small quantity of it can act as an appetizer with a heavy meal, but grilled eggplant with miso and rice can itself be used as a 3-course meal.

Note: The amount of oil you’ll need will vary depending on how long you’ll be grilling. Give eggplants a design with a knife to get a grilled look. Eggplants contain a lot of moisture but you can use salt to dry it out first so it’ll be a little less mushy and moist.

Eggplant pickles are very strong in taste and are often used as a side dish with 3-course meals. They add an exciting flavor to the food and that’s why native Japanese (as well as a lot of foreigners) love these!

This Japanese eggplant recipe is a simple guide to prepare delicious homemade Japanese-style pickled eggplant that can brighten up any dish because of its taste and texture.

Here’s a detailed list of all the ingredients required.

Note: Choose a regular or big sized jar that fits both the eggplants and the olive oil. Giving cayenne-salted eggplants more time will help the mixture to get into the eggplants core completely, adding a full flavor to the center.

For maintaining freshness, keep them out of hot temperatures.

The stir-frying technique is used as an economical way of quickly preparing a meal. Scientifically speaking, food prepared using stir-frying is much healthier than grilling or boiling.

Even though the preparation takes less time, it’s a great way to give Japanese eggplants an overall sweet and still moist flavor and great texture. Also, you need much less oil than when using other methods of cooking, so it’s also healthier!

There are many ways of stir-frying eggplants. They can be cooked with ginger, cucumber, garlic, etc., and the spice level can be adjusted.

Consume this Japanese eggplant recipe with rice, or enjoy them separately or as a side dish to your meal.

Note: Choose a pan size where all the above-mentioned ingredients can fit without overlapping. Adding fried eggplants again to the cooked garlic and ginger adds a new flavor and essence to the eggplants.

An eggplant platter can be a dish of choice for vegans and vegetarians. There are a huge number of vegan eggplant recipes.

It can be eaten with rice, noodles, beans, grains, etc. Because of its protein enrichment capabilities, it can act as a genuine meat replacement.

The following is a recipe to prepare marinated eggplants that can be enjoyed in many flavors (i.e. spicy, sweet, etc.).

This recipe serves 4 to 6 people. It contains the following ingredients:

Note: Liquid sugar or sugar powder can be used for quick recipes. Keep adding the marinated sauce while cooking to completely coat each piece.

Read on to learn more about these very tasty zucchini recipes, which you can also grill and do a lot of stuff with to add them to your dinner repertoire.