Ginataan is a Filipino dish made with coconut milk. It’s perfect for any occasion and can be made with chicken, pork, beef, or shrimp.

Here are the top ginataan recipes from our vault.

This dish’s main ingredient, tilapia, is a freshwater fish that’s especially delicious when fried or turned into soup.

In the form of ginataang tilapia though, you can have some fried fish with delicious and creamy coconut milk, which helps give a creamy flavor to the robust taste of the tilapia.

The ingredients that you need in order to cook the delicious ginataang tilapia recipe are tilapia, cooking oil, garlic, onions, salt and pepper, and coconut milk (ginataan).

When you’ve gathered the ingredients, you can start cooking this delicious dish!

Ginataang monggo recipe
The first step in making this sweet and creamy dessert is to toast the mung beans. Put them over a fire, and toast until the beans are brown. Make sure that the beans are toasted well!
Check out this recipe

After toasting the mung beans, set them aside to cool down. Once cooled, use a mortar and pestle to crush the beans and set the crushed beans aside.

On a pan, cook the glutinous rice with some water. Stir to prevent the rice from burning in the pan.

Once you’re done cooking the glutinous rice, put the monggo beans in, then coconut milk. Let it simmer.

You can add sugar to the ginataang monggo to add sweetness to the dish.

Once it has a thick consistency, you can now serve it in a bowl, either hot or cold, depending on the weather or how you want it to be. Eat it with your family or friends!

Ginataang Salmon Filipino style
Ginataang Salmon recipe is a very simple dish which is cooked with , ginger, and onion. It is not a very complex dish which proves its accessibility to people who are very good in cooking and for the beginners as well.
Check out this recipe

Leave the coconut milk aside and start sautéing the ingredients. First, the garlic and the onions, the long green chilies, and the salmon itself.

Finally, you add the coconut milk and the eggplant. Add salt and pepper to taste and let it simmer until it is cooked.

There are different versions of this dish depending on where in the Philippines the dish is cooked.

Bicolanos will prefer it with red chilis to make it extra hot, and some would ditch the eggplants. To adjust the consistency, you can also add water to make it brothy.

As with the other ginataan recipes, this dish’s preparation will take a significant amount of time if you will be the one to squeeze the coconut milk out of the shredded coconut meat.

However, with the presence of the instant ginataan mix sold in supermarkets, this should not be the case.

In case you want to enjoy it au naturel though, using coconut milk is always the way to go.

Cooking and following the ginataang Alimasag with the Malunggay recipe is a different story, however, since you just let the coconut milk boil, add the vegetables gradually and you’re done.

Ginataang langka with tinapa flakes recipe
This dish is quite nice with rice. You can serve this dish to your family and friends at parties!
Check out this recipe

Fair warning: This dish will steal your heart!

Just like any other type of ginataan dish, this ginataang langka with tinapa flakes is a sure win for Filipino family cuisine. Served with delicious coconut milk and jackfruit that tastes like chicken, it’s no wonder why this dish is specially prepared at festivals.

Filipino ginataang mais recipe
This ginataang mais recipe (or sweet corn and rice pudding with coconut milk) is a variation of the traditional Filipino dish called "ginataan", which has a wide range of ingredients. It has different kinds of fish, meat, and vegetables that are cooked in coconut milk, depending on what kind of ingredients are used.
Check out this recipe

The dish itself is much like arroz caldo in consistency, but is much sweeter and creamier in flavor due to coconut milk being one of the main ingredients, as well as the addition of sugar to the dish.

Ginataang yellowfin tuna recipe
Ginataang yellowfin tuna is a variety of ginataan. This is a creamy and tasty Filipino dish with so many varieties using all sorts of different ingredients, depending on what kind of ginataan is desired. The ingredients are then cooked with coconut milk, or locally known by Filipinos as ginata.
Check out this recipe

Ginataang yellowfin tuna (or tambakol) is a variety of ginataan.

This is a creamy and tasty Filipino dish with so many varieties using all sorts of different ingredients, depending on what kind of ginataan is desired.

The ingredients are usually sautéed then cooked with coconut milk, or locally known by Filipinos as ginata. The ginataan adds a creamy, coconut flavor to the ingredients.

Ginataang Chicken, coconut, and Papaya recipe
Ginataang  is a great and nutritious dish that one should try out, though in its unripe form can be an ingredient to other forms of Ginataan that use more vegetables, meat, seafood, and fish, the unripe, Green  can still be a standalone ingredient to make Ginataan.
Check out this recipe

To make Ginataang Papaya, the ingredients that are required are really quite easy to find in the market or your nearby supermarket if you will.

The ingredients that you need are the unripe papaya, garlic, cooking oil, shrimp paste (bagoong), salt and pepper for taste, and the coconut oil (ginataan).

Ginataang Galunggong: fish with coconut cream
Like most recipes involving the use of or ginataan, Ginataang Galunggong is a one-pot affair, making it a favorite for anyone who wants to eat a scrumptious meal without necessarily waiting for hours for the dish to get cooked.
Check out this recipe

Ask any Filipino and they would know what Galunggong is; gaining notoriety as a fish that is used to measure how much the Philippine peso could buy.

It can never be denied that Galunggong is popular not only because it is cheaper than most types of fishes but also because it is very easy to cook no matter what recipe it is included in.

Simple and uncomplicated, galunggong is called round scad fish because of its rounded body.

This fish is used in different Filipino dishes and one of these is the Ginataang Galunggong recipe.

Ginataang Manok: Filipino Spicy Chicken in Coconut Milk
If you want this dish to be even tastier, you can always opt to buy native chicken instead of the other types of chicken breeds usually sold in the supermarkets.
Check out this recipe

Mostly enjoyed as a viand for lunch and dinner, this could either be in the brothy or on the more textured side.

Ginataang puso ng saging recipe
The ingredients needed to make Ginataang Puso ng Saging are the following, (Ginataan), the flower of a banana shrub, garlic, cooking oil, salt and pepper, and the optional ingredient, anchovies.
Check out this recipe

This Ginataang Puso ng Saging recipe is another great and tasty variation of Ginataan, a popular Filipino dish that has all sorts of delicious variations made with ingredients such as meat, vegetables, and seafood that is cooked in coconut milk (Ginataan).

The Ginataang Puso ng Saging’s main ingredient is the flower of the Banana shrub, otherwise known by Filipinos as the “Puso ng Saging”.

The flower is considered a vegetable, and all sorts of other ingredients can be added to modify the recipe, such as dilis (anchovies).

Ginataang sitaw at kalabasa recipe
Sautee first the ingredients and toss in the pork, after which you add the .
Check out this recipe

It’s easy to remember the ingredients for Ginataang Sitaw at Kalabasa with Pork. First, you have the meat, which is pork.

Second, you have the squash and string beans as the main vegetables. Lastly, you have the gata or the coconut milk used to simmer all of the ingredients mentioned earlier. 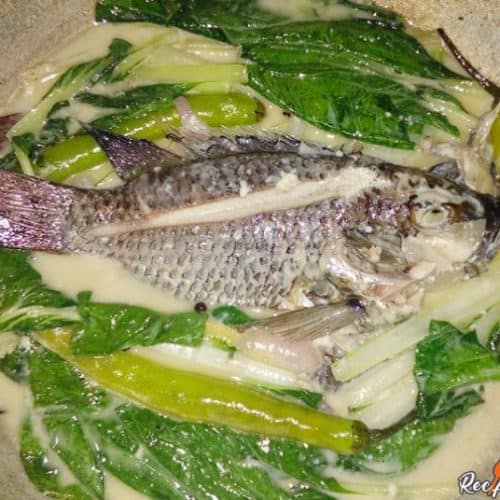 Calories: 328kcal
Keyword Ginataang
Tried this recipe?Let us know how it was!

There’s just so much you can do with coconut milk, from sweet dessert to lightly sweet savory and spicy ginataang dishes.